Just How Many Tablespoons Are There In 1/4 Cup Or In 1 Cup?
How Long Does Salmon Last In The Fridge Before It Goes Bad?
How To Reheat Pizza: It’s Not So Simple So Try These Five Ways

Steakhouse Steak at Home: Alton Brown’s Technique Will Make You A Steak Master 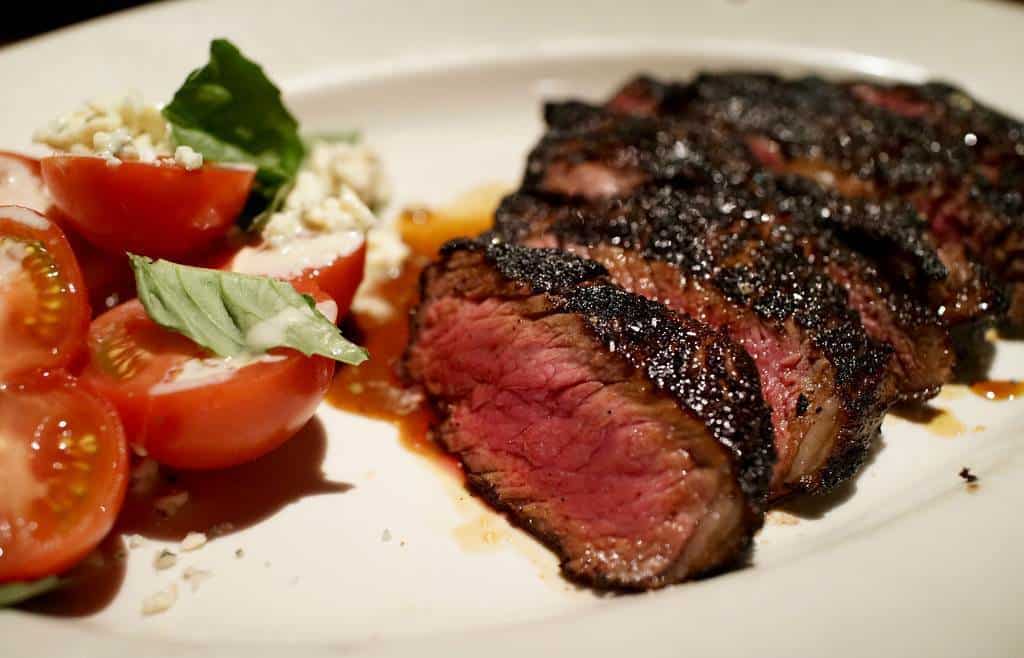 Have you ever over-cooked your steak when cooking at home because you weren’t sure how long to cook it? It happened to me when I ruined yet another prime cut steak by overcooking it!

It’s a shame when a great steak is ruined by not having a good foolproof guide. That guide for me was Alton Brown’s best steak recipe, the best that I’ve ever used, and it hasn’t failed me yet. Follow it and you’ll always make yourself a great steak.

If you’d like to skip to any part of this review in particular, just use the table of contents below. Otherwise read on for the whole recipe, you’re going to like it.

To season the steak, you just need salt and pepper.

Salt with kosher salt on all sides, then add pepper to each side.

Then take your favorite cast iron skillet (if you don’t have one, use your heaviest pan) and put it in your oven.

Preheat your oven to 500 degrees Fahrenheit, usually at or near the highest setting in a home oven.

It may take a while to get to temperature, most ovens vary and you may even want to use a oven thermometer to make sure you’ve hit 500 degrees. Or just wait until you know for sure.

Once your oven is at temperature, fire up your most powerful cooktop or range top burner and turn it to its highest heat setting (preheat if you have an electric burner).

Now, get your heavy-duty oven mitts.

Take the skillet out of the oven and put it on the fired-up burner, quickly shut the oven door to keep the oven at temperature.

(Careful, you may even feel like you’re battling a forest fire when you open your oven.)

Let the skillet sit on the burner’s high setting for 5 minutes. You are super-heating the skillet for maximum sear.

After five minutes are up, place your steak(s) in the skillet and start your timer:

30 seconds and don’t touch it, just listen to it sizzle. 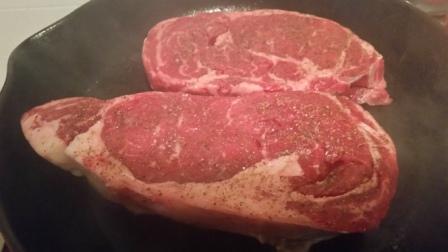 Don’t touch it! Let it sit there for the whole 30 seconds untouched, while you imagine how great your dinner is going to be. It will smoke like it does in these pictures above as the canola oil hits the super-heated pan.

When the timer’s up, use tongs or a spatula to flip for another 30 seconds. You can see here the sear that has already made its mark on the first side. 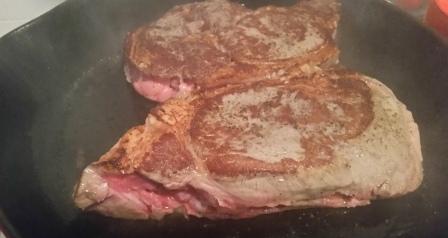 When time is up, congratulate yourself, you now have seared your steak!

Now For The Oven

This is simple and short, make sure you remember to have your oven mitt on.

Take your skillet and put it in the oven.

Try to minimize the time your oven door is open by synchronizing the oven door opening with your putting it in the oven! You don’t want to lower your oven temperature too much!

Shut the oven door and cook for 2 minutes.

Then, put on your oven mitts if you’ve taken them off. Take the skillet out of the oven and place it on your range top and flip the steak(s).

Leave your oven mitts on and put the skillet back in the oven for another two minutes.

If you prefer medium, add a minute to each side in the oven.

Once the time is up, it’s done!

One slight tweak that I’ve made to this recipe is very simple.

Once I’ve cooked the first two minutes in the oven, I add some cooking power by going to full broil for the second two minutes (or longer for more well done). You may even want to adjust your oven rack to the highest or a higher position if you haven’t already.

This final tweak will put a nice crispy sear to the top of the steak, which for me is a perfect finish.

As soon as time is up, use those oven mitts to take the skillet out of the oven and let the steak rest.

Let it rest for 5 minutes.

Don’t touch it, don’t even look at it!

You can just smell it and realize you’ve done something great here. You’ve climbed to the pinnacle of meat preparation.

One alternative is to add butter during the oven cooking time, after the first flip, if you want to duplicate a steakhouse taste profile. Melt a dollop of butter on the top of the steak as it cooks and you’ll have that taste.

I prefer my steak more rare, or “steaky”.

Before you move on to eating, let me recommend some things that will give your beautiful steak the right company

Sure, you can choose a cabernet sauvignon. That’s what they usually tell you to pair with a steak like this.

If you really want a slap across the face though (in a good way), go get yourself a California old vine Zinfindel. Some of these grapes have been growing in California since before it even became a state. These wines are the equivalent of sour patch candy, for adults. It’s not that they’re sour its that they’re spicy and in a good way.

There are plenty of reasonable choices here and a good selection can be found in most grocery stores or wine stores. 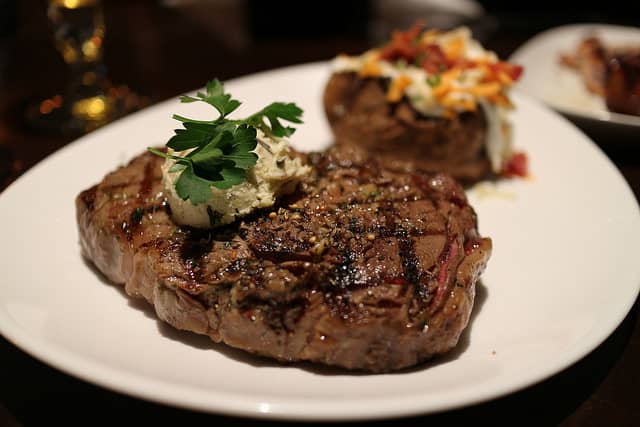 Just sautee a bunch of spinach, enough to fill your pan, in olive oil with some diced garlic. It will reduce a lot as the water is cooked out of the spinach.

After the spinach is cooked down and infused with olive oil and garlic, add some sliced cherry tomatoes and burrata cheese, if you have it. Burrata is a much richer version of mozzarella that is sometimes hard to find but worth trying if you haven’t already. It’s a nice added touch to the dish.

You add the tomatoes and torn cheese to the hot spinach and let the heat infuse through them.

By expertly cooking this steak, you’ve advanced thousands of years in civilization in the space of six minutes.

Starting with raw beef that would have only been edible to pre-civilized, fire-less cave dwellers, you’ve refined it with the aid of fire into a piece of seared perfection. You can be proud that this steak would happily be served in any steakhouse with a 150% markup!

So consider that and congratulate yourself while eating the best steak you’ve ever cooked at home.

About the Author Sabrina

Sabrina is our head writer and expert researcher. She spends countless hours of research on each topic or product she writes about. She also tests products and recipes when she can and is known as a kitchen appliance junkie who is always trying new gadgets. Plus, she's a fairly decent cook above all else!

This looked so good and easy I had to try it. This is why I wanted to tell you that it turned out to be wonderful. The steak turned out just perfect not to dry or to juicy. I made it for my husband and he absolutely loved it.

This looks so good!

Looks amazing. I shall try it

One more thing. Lightly oil the steak before seasoning. I too learned this from Alton and doing it for years.

Awesome! I love this recipe!

We’re having steak tonight and I am going to cook it that way.

So yummy! We loved this recipe. Definitely going to be a staple for my lunches from now on!!

This article is very informative and I feel like you are reading my mind.

looks delicious 🙂 Can’t wait to try it. Thanks for giving the nice tips.

I prefer Ribeye as well. You said heat up the oven to 500.. then remove the skillet from the oven. The only thing is.. you did not say how long to leave it in the oven at 500 degrees.. ?? HELP!

from the post “Shut the oven door and cook for 2 minutes.

Then, put on your oven mitts if you’ve taken them off. Take the skillet out of the oven and place it on your range top and flip the steak(s).

Leave your oven mitts on and put the skillet back in the oven for another two minutes.

If you prefer medium, add a minute to each side in the oven.”

Wow. A fabulous looking steak. You are right, an old vine Zinfandel would slap you into next week paired with this steak. Love it. Thanks for sharing.

Steakhouse Steak at Home: Alton Brown’s Technique Will Make You A Steak Master

Want To Make Something Special And Unexpected For Your Guests?

Simplest Eggs Benedict Ever! Plus Extra Sauce For Extra Things…

Recipe
We use cookies on our website to give you the most relevant experience by remembering your preferences and repeat visits. By clicking “Accept”, you consent to the use of ALL the cookies.
Do not sell my personal information.
Cookie SettingsAccept
Manage consent

This website uses cookies to improve your experience while you navigate through the website. Out of these, the cookies that are categorized as necessary are stored on your browser as they are essential for the working of basic functionalities of the website. We also use third-party cookies that help us analyze and understand how you use this website. These cookies will be stored in your browser only with your consent. You also have the option to opt-out of these cookies. But opting out of some of these cookies may affect your browsing experience.
Necessary Always Enabled
Necessary cookies are absolutely essential for the website to function properly. These cookies ensure basic functionalities and security features of the website, anonymously.
Functional
Functional cookies help to perform certain functionalities like sharing the content of the website on social media platforms, collect feedbacks, and other third-party features.
Performance
Performance cookies are used to understand and analyze the key performance indexes of the website which helps in delivering a better user experience for the visitors.
Analytics
Analytical cookies are used to understand how visitors interact with the website. These cookies help provide information on metrics the number of visitors, bounce rate, traffic source, etc.
Advertisement
Advertisement cookies are used to provide visitors with relevant ads and marketing campaigns. These cookies track visitors across websites and collect information to provide customized ads.
Others
Other uncategorized cookies are those that are being analyzed and have not been classified into a category as yet.
SAVE & ACCEPT